Warning: "continue" targeting switch is equivalent to "break". Did you mean to use "continue 2"? in /home/strateg1/public_html/blog/wp-content/themes/suffusion/functions/media.php on line 694
 League of Legends: Snowdown Showdown 2017 Skins’ Review – StrategyZero 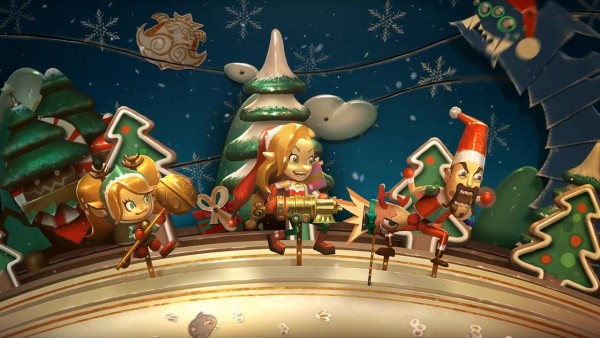 An elf was waiting, eagerly, impatiently for the arrival of the gifts. The young deer toiled with the sled trying to make the delivery on time. The clock was ticking, impervious to the nervous haste, bringing the hour closer. The elf paced and jumped all around the place, the deer pulled with all possible strength. The bell tolled, the elf looked out the window and the sled was there with a very tired but satisfied deer in front. The elf rushed in a toy train to the sled and started loading the gifts and the deer in the wagons. In the house, under the large tree, they were all placed in their respective places; except the deer. The elf accelerated and, with exhausted deer resting in a wagon, exited the house and approached the sled. It was time to move on to the next house.

This set of Snowdown Showdown skins is good. On the one hand the concepts are, majorly, quite interesting. However, the executions seem to lack focus and try to be too many things at the same time. Elements are combined without proper links and, specifically, the snow added to each skin doesn’t fit. It’s related to the season but is an aspect that, for the most part, remains disconnected across the skins. As if a dose of the Snow Day line were added arbitrarily. If you can see past the unfocused approach then there are a few things to like.

Snow Fawn Poppy is a charming skin with a magical costume that sees Poppy fly as well as jingle bells when the time for action comes. The snow isn’t effectively connected to the general idea of the skin so it can feel out of place. Regardless, the result is surely appealing if you can forgive its inconsistencies.

The playful, toy-centric angle of Ambitious Elf Jinx is delightful. It suits Jinx’s personality and shows a playful and appealing display of mischief. Unfortunately, the addition of snow and ice doesn’t help the theme and ends up concealing the appeal of its best features. The result is uneven but still attractive if you can excuse the inconsistency.

Santa Draven is a skin that lacks focus. It has its central message but diluted by related elements that don’t add up to a cohesive whole. This makes the skin feel like a combination of ideas without a unified link. There may be something to like beyond the chaotic execution but there’re also much better alternatives.