Warning: "continue" targeting switch is equivalent to "break". Did you mean to use "continue 2"? in /home/strateg1/public_html/blog/wp-content/themes/suffusion/functions/media.php on line 694
 League of Legends: Snowdown Showdown 2015 Skins’ Review – StrategyZero 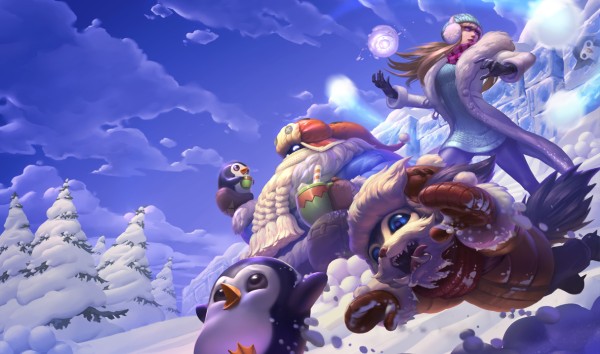 Snowdown Showdown 2015
Build your fortress of shining ice, strong and mighty, may its walls raise high.
Gather your friends, take cover and duck, don’t let the enemy get you with a snowball.
May the Poro King bless your battles, aim and shoot, may your sight be acute.
Snow day here, snow flies everywhere, having fun with friends is being a millionaire.
The day becomes dusk, we take refuge at home, warming up with a hot cocoa cup.
Tomorrow another adventure awaits, friends and enemies mix again, it’s just us on a new snow day.

Blue sky, blue clouds, even the ice fortress looks blue. Without a doubt, blue is the main colour and few things contend with it. Some trees defy its domain with dark leaves and clear snow as well as some more of said element nearby. However, sans some penguins in and out of ice, there’re only champions to see. As a setting, the background is largely filler to give the snow day a place.

The depictions vary greatly in quality. Not only that but the champions stay independent of each other and there’s no integration or interaction between them or with the setting. They could each be on their own anywhere else and their generic pose wouldn’t pose any problem. There’re some exceptions but, at large, that’s the feeling the piece gives.

Going into specifics, Gnar is depicted with bright colours that get diffuse as easily as looking away from his hand and left glove. The dull colours make little sense but the chased penguin adds a nice setup for his appearance.

Bard sits with a hot cocoa cup in one hand and a penguin in another. The idea is simple but works though not much of his look can be seen. On top of that, the colours are a bit dull and so his portrayal isn’t as striking as it could be.

Syndra is in a league of her own: her portrayal looks like a sketch. It’s not just that the colours lack any vibrancy but it’s also that the proportions seem slightly amiss and the look strikes as flat and devoid of life. The idea that she may be readying to respond to a snowball attack does little for the lifeless depiction.

All in all, this is merely a functional splash art. It shows the three champions against a sensible backdrop and that’s it. There’s little that makes the spotlight exciting or that shows something different about the champions or shared theme. By and large, it’s a disappointment.

Overall, this is a good set of Snowdown Showdown skins. The ones that stand out the more are the most expensive ones: Snow Day Syndra and Bard. They offer a vast array of changes yet all within the realm of what’s already present. There isn’t anything new only changes to what already exists. The adaptation is quite good in both cases but for seasonal skins there’s a missing extra that would set them apart as something unique.

Snow Day Gnar is more modest in comparison but still covers the required modifications to represent the new theme. It could be said that it’s not as ambitious a skin as the other two; even if there’s room for more at its lower price. Regardless, it’s not a bad skin at all.

All in all, these Snow Day skins are fine options. They offer a sensible amount of changes and even if they don’t manage to go an extra league in their executions the result is appealing in all three cases. The theme is nothing groundbreaking to start with but they manage to provide something appealing in each case. If you’re searching for some snowy or icy fun then they have a few tricks up their sleeves to offer.