Warning: "continue" targeting switch is equivalent to "break". Did you mean to use "continue 2"? in /home/strateg1/public_html/blog/wp-content/themes/suffusion/functions/media.php on line 694
 League of Legends: Renekton Skins’ Review – StrategyZero 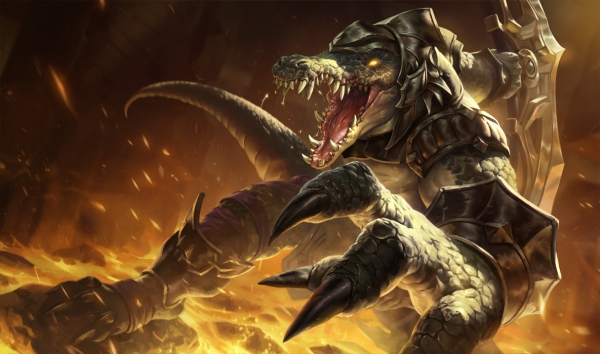 Renekton, the Butcher of the Sands

Renekton, the Butcher of the Sands slices and dices at his heart content; it’s what he does and he’s very good at it. Yet, that doesn’t mean that he doesn’t know how to look good while culling the meek as he has an enviable wardrobe. If you want anger to reign then this ruthless predator will rather his best clothes so take a look at this skins’ review.

In general, Renekton only has good skins; it’s not as if he would allow anything else. Due to the appealing dinosaur traits and impressive blade a skin worth recommending is Prehistoric Renekton. His aspect suits the Butcher’s style effectively while also having a prehistoric feel. It’s not the perfect skin for fans of dinosaurs but fans of Renekton will find much to like.

From the more traditional options, if there’s one skin to recommend, then it would be Bloodfury Renekton: it enhances and reinforces Renekton’s nature while explicitly and proudly displaying it; though it’s a bit expensive for a re-model.

A more pretentious yet also spectacular skin is Scorched Earth Renekton. It’s a skin that emphasizes appearance above anything else. Regardless, if you don’t mind its clearly fictitious style, it can be eye-catching with its array of flames and raw power.

Of course, there are other great skins: Galactic Renekton stands as a cheap but fantastic, sci-fi option. Whereas Rune Wars Renekton gives him a layer of civility while Outback Renekton goes directly down under.

Pool Party Renekton offers the strangely fitting role of lifeguard to Renekton in which he finely revels. The general appearance may fail to impress but it surely is appealing. As far as fun goes for the Butcher, it’s the only choice.

SKT T1 Renekton is a flamboyant skin with too pronounced a tribute to the corresponding team. The modern take isn’t bad but the extravagance detracts from the few interesting design choices made. Those looking for a contemporary style will find the skin overdone but the team ad side works.

Renektoy is a simple skin with an effective result. The plastic toy fantasy is appealing with its gentle yet appealing design. Dominus doesn’t help as much the theme but the death animation is a great touch of which there should be more. If you want a toy crocodile warrior to fight your battles then there’s no better choice.

Hextech Renekton is a skin without focus. It doesn’t communicate the hextech theme well and also doesn’t effectively integrate it with Renekton’s identity. There may be some things to like in the skin but it can strike as a sanitised, flashy version of Renekton without a real reason to be so.

In the end, it’s hard to go wrong with any of Renekton’s skins so it’s better to choose based on personal preference. All the skins have good concepts and executions so all that is left is to choose your favourite and unleash the Butcher.