Warning: "continue" targeting switch is equivalent to "break". Did you mean to use "continue 2"? in /home/strateg1/public_html/blog/wp-content/themes/suffusion/functions/media.php on line 694
 League of Legends: Lunar Revel 2019 Skins’ Review – StrategyZero 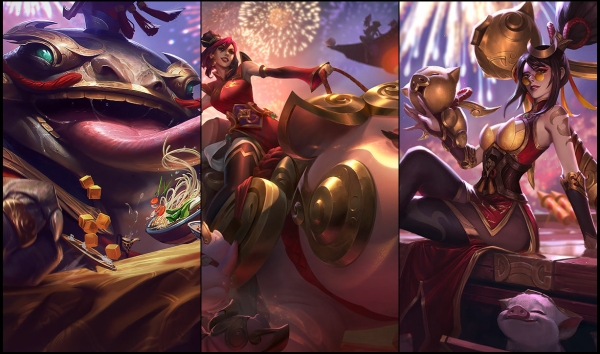 The Emperor wanted a great celebration for the New Year and the parade was to be the centre of it. With fireworks and a large procession it garnered a lot of attention, in this world and beyond. A wraith set its sights on the coins and gold of treasury and regalia. Was it simple greed which motivated the spectre or was there a desire to ruin the empire? Whatever the reason he didn’t have an easy time.

A monster hunter was enjoying the celebration and, watching the parade, noticed strange, supernatural energies swirl by. With the help of purifying magic and a few well executed explosives coming from the experts in the parade the wraith was deterred to the happiness of all, especially the Emperor. Would the wraith return from whatever strange lands it lurked? No one could know for sure but that the celebration was going to continue in full, there was no doubt.

While these skins have appeal they seldom feel as special as their concepts and splash arts suggest. Implementations often offer good features but results tend to be uneven. In some cases, the skins are unable to rise above their problems and can feel disappointing. The odd skins this year are the release skin, Lunar Wraith Sylas and the promotional skin, Firecracker Vayne Prestige Edition. Unfortunately, despite having the chance of being extra special they squander it with by the numbers additions. Thus, the skins that are best are simply good.

Coin Emperor Tahm Kench is a skin that suffers from a superficial adaptation that barely exposes the coin and emperor facets suggested in the name. The most enjoyable feature ends up being the fireworks of the ultimate which bear little relation to the skin’s theme. The result is a skin with a few features to like but too much reliance on Classic Tahm Kench.

Firecracker Sejuani is a cartoony skin with appeal. It’s far from serious but it captures the celebration’s spirit. The fireworks are the best feature even if they are rather measured. The golden decorations and coins can clash with the theme, though. Regardless, given the approach taken, it’s a nice skin.

Firecracker Vayne is a skin that has appeal but also a noticeable untapped potential. Weak in both eastern ceremony and fireworks’ impact what is present shows a personality which isn’t as well developed as it could be. While the skin can be charming it also shows that it could’ve been much more elaborate and interesting. Firecracker Vayne Prestige Edition adds a few different features but they are really few and certainly not distinct. Considering the price and what’s on offer, there’s nothing worthwhile.

As a release skin Lunar Wraith Sylas is disappointing. The new identity is hardly defined and there’s a noticeable reliance on the classic counterpart. This leaves the skin being rather shallow even if there are a few things to like. Being legacy and expensive certainly doesn’t help matters. For fans of the Unshackled, it’s the available, flawed option they have. However, perhaps waiting for a new option isn’t a bad idea at all.