Warning: "continue" targeting switch is equivalent to "break". Did you mean to use "continue 2"? in /home/strateg1/public_html/blog/wp-content/themes/suffusion/functions/media.php on line 694
 League of Legends: Samsung Galaxy Season 7 Skins’ Review – StrategyZero 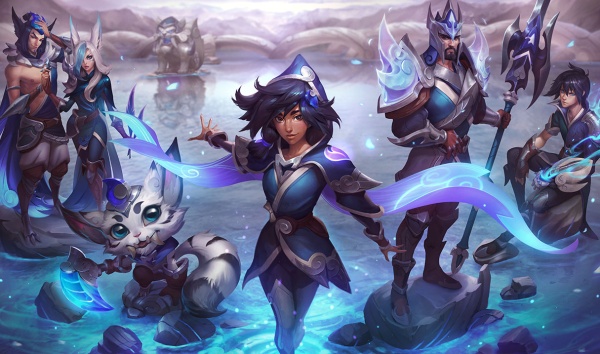 Blue, traditional clothes. Blue, misty magic. Blue, wavy patterns. Samsung Galaxy are the champions of Season 7 and their skins subtly or not so subtly reflect that. The theme is interesting even if it doesn’t seem to have much depth. Do the executions realise skins that impress with new identities and interpretations of the champions? That’s what we’ll shortly find out. Let’s take a look.

The setup is pretty simple: a lake surrounded by carved rocks in the form of waves. There’s a statue of Mega Gnar which, despite how diffuse it is, looks photorealistic. Besides some rocks for the champions to stand on, except Taliyah whose feet aren’t visible, we can only comment on how clear and fresh the water looks. It’s a setting for the champions to be present but there’s no content or meaning in it.

The champions appear in a way that part of their personality is visible in their stance. Xayah and Rakan hold hands to represent their link, Gnar is mildly curiuos, Taliyah is confident, Jarvan IV serious and Ezreal cocky. Each portrayal is eloquent enough about the look of each champion. Taliyah, being at the forefront shows the sharpest colours with an appealing soft glow on her strips; Jarvan IV and Gnar’s transparencies are more solid. Ezreal manages to show a nice glow to represent his powerful magic but Xayah and Rakan look a bit dull with washed out colours.

All added together, this is a shared splash art that takes the shared part to heart. Each champion gets a good share of the space available but the composition is content with simply showing each one. The setting has little significance and each champion is only able to display a bit of personality in their stance. The result is a splash art that works at the basics but doesn’t aim at anything else.

In general, SSG skins don’t feel as special as one would hope. For legacy skins at the 1350 RP tier the theme is rather homogeneous between them and the executions shallow. That’s not to say that there aren’t things to like; misty particles and wavy patterns are examples. However, they aren’t sufficient to justify skins that should impress. One by one, this is a summary of how they feel.

SSG Ezreal has a nice identity but a lacklustre execution. The young magical prodigy is interesting but the similarities to classic leave the skin feeling superficial. With more depth the identity could’ve been developed farther from Classic to better justify how special the skin is supposed to be.

SSG Gnar is a skin that adds a layer of civility to Gnar. The approach is superficial so that a new identity isn’t developed and the result is quite shallow. The most salient feature ends up being the blue colours. Given how special the skin is to be the result hardly is a good example.

SSG Jarvan IV is a skin that changes the surface with a more magical take on the Prince. The approach is appealing but the core of the champion remains intact. As this is a skin that is to be a special, legacy offering the result isn’t as impressive as one would expect.

SSG Rakan is more than Blue Rakan but only just. Model, particles and sounds reinforce his flamboyance but with small additions based on the classic template. There’s something to like in the skin but not much is offered. As a skin that is to be a special, legacy option it doesn’t seem like much.

SSG Taliyah is a classier and more stylised interpretation on the Stoneweaver. The core is untouched but the surface changes with an attractive but shallow new take. For such a special, legacy skin the approach seems rather timid despite the appeal that it evidently has.

SSG Xayah is little more than Blue Xayah. The new model dresses Xayah in shades of blue and the feathers get a misty, blue glow that feels magical but is rather homogeneous across abilities. There’s some appeal in the skin but that’s owed to the new colour. For a skin that should feel special, there isn’t much to justify it.