Warning: "continue" targeting switch is equivalent to "break". Did you mean to use "continue 2"? in /home/strateg1/public_html/blog/wp-content/themes/suffusion/functions/media.php on line 694
 League of Legends: Lunar Revel 2018 Skins’ Review – StrategyZero 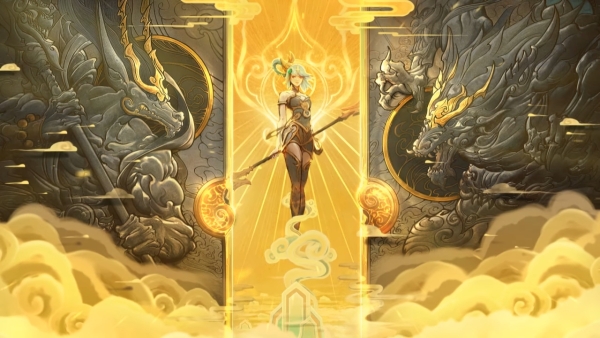 From birth she was tasked with protecting her realm. She received two pups as a gift to guard her as well as the kingdom. The years went by, the training was extensive and the pups grew up. She became an Empress and her pups canine Guardians that watched over the realm with her. There was peace and so the Empress grew apart from her Guardians as her land prospered. One day, darkness stroke.

The Wraiths came and tarnished the land with their darkness. Fortunately, the Empress hadn’t forgotten her training and reunited with her faithful Guardians, defeated the Wraiths and drove the darkness away from her realm. This happened many years ago but we know that the Wraiths are waiting in the darkness. At the gates, the Guardians stand tall on their watch and our Empress is watching over us too.

The florid designs of the models give a great first impression but these Lunar Revel skins start to disappoint under closer inspection. There are good features to like but usually surrounded by dullness which leave a bitter taste. This unevenness doesn’t help the skins and if we add that the best features aren’t groundbreaking we end up with skins that struggle to feel as special as they ought to.

Lunar Empress Lux is a skin with a darker fire form take on Elementalist. The similarities are too many to ignore. The advantage is that it makes the skin work rather well but the downside is that it also makes it too familiar. As a budget, stylised extra fire form it’s a nice skin. It’s not an option with a clear identity but there’s no doubt that it’s an appealing skin in its way.

Lunar Guardian Nasus is a skin with a florid style that is unevenly employed and often wasted. It has some features that stand out but it stands far from the special place that would be assigned to an event, legacy skin. It’s an interesting skin, no doubt, but more of the interest lies in the potential rather than the realisation.

Lunar Guardian Warwick is a skin with moments that catch the eye and don’t let go but sailing in a sea of dreariness. For being a special skin it shows that there was some idea to make it stand out but the uneven execution ends up marring any good intentions.