Warning: "continue" targeting switch is equivalent to "break". Did you mean to use "continue 2"? in /home/strateg1/public_html/blog/wp-content/themes/suffusion/functions/media.php on line 694
 League of Legends Death Sworn Skins’ Review – StrategyZero 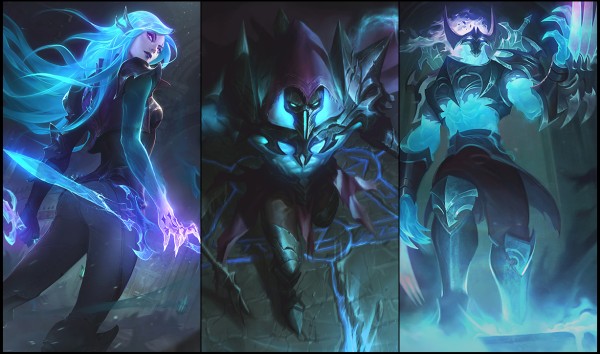 Tales from the Rift: Death Sworn

Death is no rest, it’s no end: it’s a beginning. It’s another life, another chance to right wrongs and pursue what in life passed you by. For some, their call is darker: it’s not about chances but about ending them; for others. Revenge will be swift and no one will know what had befallen them, until it’s too late. For others, it’s about reminiscing about the past. Look back to all that is lost and trying to keep the memory fresh. Some revel in their new undead life, others suffer, some are even indifferent. Which kind are you?

Death Sworn Katarina is a skin with an interesting, spectral feel that is classy and attractive. Sadly, there’s not enough variety in the skin to make each aspect as distinct as the approach of the skin is. The result is good, nonetheless. There’re no areas that are bad but they don’t take advantage of the good features as well as they could. With some extra variety and vibrancy the skin would be great.

With great visuals we find Death Sworn Viktor. It’s a skin that clearly communicates the warlock feel with powerful spells at his disposal. Such spells aren’t always very different from classic or dark enough but they have a couple of distinct features; so do the sounds for their unsuitable hi-tech feel. In spite of inconsistencies, it’s a skin that delivers on its premise.

Distinct despite flaws, Death Sworn Zed is a skin with spectral aspirations that ends up being just ghostly. The skin has good ideas but they are often unexploited. Besides, the ghosts that often fly around feel too playful and far from frightening. This results in a skin that has appeal but not the kind that could be expected. The fact that several elements are also not taken advantage of means that there’s too much untapped potential.

This set of skins has good features but tend to have identities which aren’t taken advantage of as much as they could’ve. The style is often good but the approach seldom brings the appeal of the concept to the forefront. It’s a matter of simplicity and wasted opportunities that join together to leave the skins in a worse place that they could’ve ended. Without shadow of a doubt, Death Sworn Katarina and Death Sworn Viktor are the most interesting. Death Sworn Zed is lacking and it shows.