Warning: "continue" targeting switch is equivalent to "break". Did you mean to use "continue 2"? in /home/strateg1/public_html/blog/wp-content/themes/suffusion/functions/media.php on line 694
 League of Legends: SKT T1 Season 3 Skins’ Review – StrategyZero 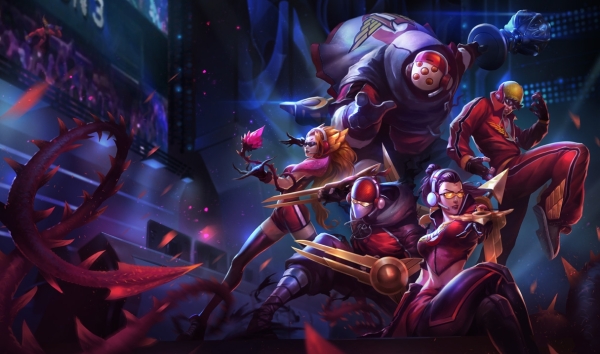 SK Telecom T1, the World Champions of Season 3 inspire a set of skins with a distinctly modern style. At a glance they seem like mere merchandise but a second look reveals a few relevant details that add to the personality of each skin. Do you want to know more? Keep reading the SKT T1 skins’ review.

Just like last year TPA skins, the SKT T1 skins share the same splash art. Also, following on the footsteps laid before, the splash art is content with depicting the team of champions at an arena among bright lights and confetti. As dynamic as the portrayal is it also feels like it’s treading the same ground. It also doesn’t help matters that the background is so diffuse and that the setting seems empty.

That considered the champions do look good. Each depiction speaks about them though not always in the right way. Specifically, Jax appears agile and ready for a fight, Lee Sin concentrated and physically apt while Zed seems sneaky and lethal. The ladies though don’t shine as much: Zyra simply lashes forward with her classic tendrils and Vayne looks unexpectedly light-hearted and enticing.

In a way, it seems that the splash art followed the traditional path: powerful guys flanked by sexy girls. To be fair, the portrayals are nice with vibrant shading and great variety of colour. Besides, for better or for worse, all the champions look attractive in some way. Therefore, we can say that it’s a piece with a disappointing background and a good portrayal that doesn’t always display the best that each champion can offer.

In general, the SKT T1 skins are rather good despite usually asking for a bit extra suspension of disbelief; if you want them to be more than merchandise. They all base themselves on modern casual styles and so the effectiveness usually depends on how fitting that would be for every champion.

The recommended skin is SKT T1 Zed due to the interesting street ninja appearance. The modified abilities aren’t bad either but they are undoubtedly a secondary effect of the new model. Regardless, the look seems practical and eye-catching as things tend to be nowadays; even ninjas.

Other great options are SKT T1 Vayne and Jax. The former updates Vayne’s look to current standards so as to make her pass as a contemporary night hunter. Unfortunately, the style is a little too casual to really be convincing. Additionally, Jax accomplishes a reasonable street fighter look with weapon of opportunity included.

Finally, both SKT T1 Zyra and Lee Sin struggle to be more than a change of clothes. With a good deal of imagination Lee Sin can be taken for a breaker swiftly performing acrobatic moves. Sadly, Zyra ends up as a plant girl in modern clothes. She does look nice but also isn’t able to say anything else.