Warning: "continue" targeting switch is equivalent to "break". Did you mean to use "continue 2"? in /home/strateg1/public_html/blog/wp-content/themes/suffusion/functions/media.php on line 694
 League of Legends: Wukong Skins’ Review – StrategyZero 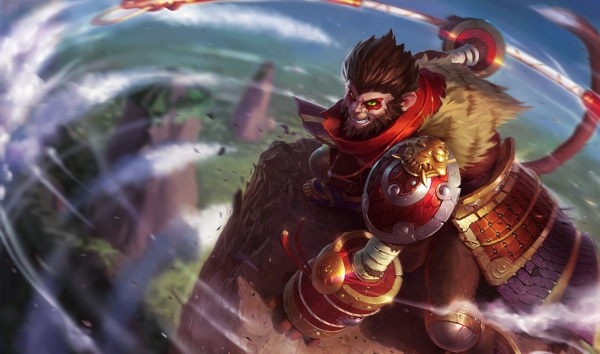 Wukong, the Monkey King has a few interesting visual concepts with interesting implementations. The notions of fire and enlightenment, among others, are executed in separate and in unison with widely different results. If you want to know more about how Wukong adapts to this visual ideas, read further on this skins’ review.

Wukong’s skins have good quality in general even though they draw from only a few concepts. Volcanic Wukong and Jade Dragon Wukong are the recommended skins as they provide visually interesting looks for the Monkey King. The former is more stunning while the latter is more consistent; still both have a few flaws.

A skin with a unique design that seems quite interesting at first glance is Radiant Wukong. Its main problem is that it doesn’t take long to demonstrate its superficial additions with regards to particles and sounds. The lack of colour also doesn’t help matters as it can end up feeling monotonous. It’s still a skin with some interesting aspects so fans should wait for a sale. Regardless, there’re a superior options at lower prices.

General Wukong isn’t a bad skin but it’s neither stunning nor consistent. It doesn’t provide as much as the other skins yet it may appeal to those that like its particular style.

Underworld Wukong is quite a letdown at its price. There are some good touches but on the whole it fails to justify the high expense. Unfortunately, it fails to represent its concept in an appealing way and its few saving graces feel like too little for too much.

Lancer Stratus Wukong is a skin with a great concept and a disappointing execution. The adaptation is so shallow that instead of finding a titanic mecha or even a more normal robot that does feel synthetic. The hints of hi-tech are few and they can do nothing about the overwhelming classic personality; the magic is barely there. There are a few things to like but in general the skin doesn’t deliver.