Warning: "continue" targeting switch is equivalent to "break". Did you mean to use "continue 2"? in /home/strateg1/public_html/blog/wp-content/themes/suffusion/functions/media.php on line 694
 League of Legends: Teemo Skins’ Review – StrategyZero 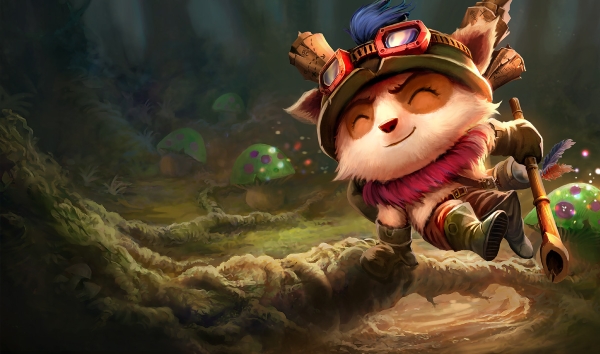 Teemo, the Swift Scout is a yordle that embraces his cute side and practically eliminates anything else from his wardrobe. While most of his skins follow this trend there’s some variety in how that is accomplished. If you want to find out more about how cute Teemo can look then read further on this skins’ review.

Teemo is a champion designed with cuteness in mind, therefore, the skins that reinforce that concept work better than those that try to be more serious. Cottontail Teemo is the recommended skin for Teemo fans: it simply heightens everything that makes Teemo appealing. Super Teemo is a also nice skin if you enjoy its goofiness and Panda Teemo isn’t bad if you find its aesthetic attractive.

Special mention has to be given to Omega Squad Teemo. The skin has an attractive dark style with a satisfying implementation. It’s also a bit uneven in that it has some remarkable features but most changes merely do what’s necessary to make things work. Nevertheless, in the sum of its parts it’s an interesting skin that would please fans of Teemo and those looking for something different.

If one enjoys causing frustration and anger in enemies then Little Devil Teemo is a particularly accomplished skin in that regard. It takes all that is hated about the Swift Scout and packages it into an appealing, faintly demonic personality that captures the heart behind its concept. While there’re more impressive skins the well rounded adaptation makes Little Devil Teemo the best choice for unleashing true horror on the battlefield with a cheeky yet terrifying smile.

Astronaut Teemo is a nice skin that doesn’t come together as well as it should and it’s better purchased by Teemo’s most dedicated fans. Recon Teemo is a cheap alternative; it does quite a bit with simple textures but there’s only so much it can do.

Beemo is a skin that draws from the classic feature of Teemo’s appeal: cuteness. It delivers what it intends to but without breaking any new ground. Given how many skins do the same and how little the skin innovates and how shallow the implementation is there’s little reason to prefer it to other options sans bee concept. If you are a dedicated Teemo fan, add a star and consider it good.