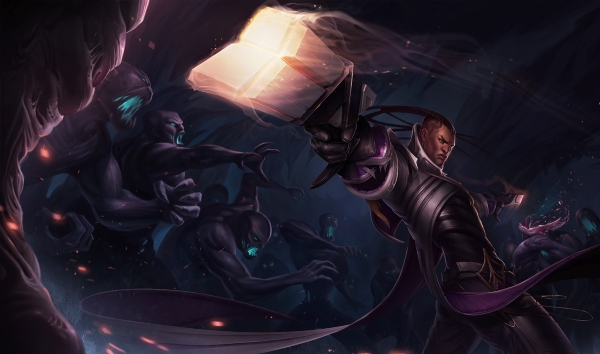 Lucian’s sole reason for existence is to cull all undead from the face of the world; but he intends to do so with style. With Senna in his heart and their guns in his hands Lucian doesn’t have any trouble adapting his looks to what the situation demands. Therefore, let’s see what skins this wolf wears in his quest for purification.

Lucian has few skins available and, while good, they leave the feeling that there’s untapped potential. The recommended skin is Hired Gun Lucian: as a release skin, it’s quite good. While it doesn’t reinterpret the Purifier it does provide a fresh take that maintains his essence. The new appearance is attractive and appropriately balances function and form. Overall, it’s a good purchase for Lucian’s fans though it may not be enough to convince those that remain incredulous.

A cheaper alternative is Striker Lucian which, for the most part, is just a football costume. The idea is well implemented but in a simple way so it feels somewhat plain. For fans of football it’s an option worth considering but for most it offers little.

As far as concepts go PROJECT: Lucian has a rather good one that is well started but left without a glowing finish. The idea is presented with good elements but not enough to justify the expense; even his ultimate lets down with reused particles. Because of this, it’s a skin that has appeal but that doesn’t deliver a sufficiently developed theme.

Even those that find the heart charmer approach of Heartseeker Lucian palatable will find little of interest in the skin. Besides the look of someone who needs a proper hobby there’s little beyond hearts, petals and a few simple sounds; the recall is just a brief joke. The skin lacks a distinctive feature that sets it apart so that there’s little appeal despite Lucian’s best effort.

The legendary option is High Noon Lucian and it’s certainly a good one. There’re appealing Old West references and a contrast with a demonic influence. However, both themes seem detached from each other and don’t fully mix in a middleground. The most interesting features of the skin are quite specific and the base seems all too noticeable. For a legendary skin, it seems like High Noon Lucian lacks depth but remains a good option, without doubt.