Warning: "continue" targeting switch is equivalent to "break". Did you mean to use "continue 2"? in /home/strateg1/public_html/blog/wp-content/themes/suffusion/functions/media.php on line 694
 League of Legends: Jinx Skins’ Review – StrategyZero 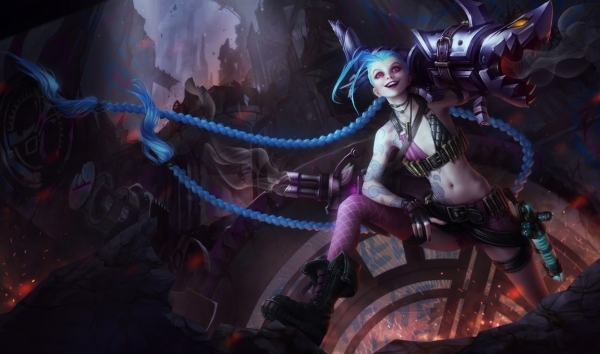 Destruction, utter and complete demolition of buildings and straight faces; what is not to like? Jinx comes to light the day, and the fuse, until it all falls down in happy debris. On top of that, she’s not only doing it multiple times, she dares do it with the style of different time periods. Keep reading and find out more about Jinx’s peculiar sense of fashion.

Spreading chaos wherever she goes Jinx also likes to fit in with the locals, at least before it all explodes. With that in mind, her recommended skin is Mafia Jinx. For a release skin, Mafia Jinx is an interesting deviation that instead of furthering her style moves it to another era. The vintage style is well recreated though there are a few things that don’t convince. In the end, it’s a nice skin that would appeal to fans of the 1920’s.

One alternative is Firecracker Jinx. At a glance it’s a fantastic skin with striking visuals and sounds. However, it’s not as consistently implemented as it could. Besides, the additions, very attractive and all, don’t justify such a high price. Fans of Jinx and fireworks are advised to catch the skin on sale.

Another alternative is Slayer Jinx. The aesthetic is rather uninventive and too safely close to her classic style. The industrial aesthetic of her weapons is nice but there’s nothing that clearly states the zombie theme; recall aside. Unsurprisingly, the skin looks nice but that’s owed to the reliance on the classic aspect. It’s a good skin for Jinx’s fans but also expensive and lacking any impressive features so it’s better to get it on sale.

When we reach the legendary option Star Guardian Jinx stands tall as a worthy alternative worth of its moniker. The model, particles, sounds and some animations are great but the new familiars set the skin apart. They are taken advantage of to instil the skin with a unique personality that is permeated to many of Jinx’s usual actions. This results in a skin with a distinct style that fans will surely appreciate.

The Christmas, legacy offering is Ambitious Elf Jinx. The playful, toy-centric angle of the skin is delightful. It suits Jinx’s personality and shows a playful and appealing display of mischief. Unfortunately, the addition of snow and ice doesn’t help the theme and ends up concealing the appeal of its best features. The result is uneven but still attractive if you can excuse the inconsistency.

Odyssey Jinx is a good skin but also superficial. Jinx’s identity isn’t modified in any way so that she’s merely transported to a space-faring context. The implementation communicates that but without any novel features. The result is appealing and effective but there’s a lot owed to Classic. Still, it’s a good option.