Warning: "continue" targeting switch is equivalent to "break". Did you mean to use "continue 2"? in /home/strateg1/public_html/blog/wp-content/themes/suffusion/functions/media.php on line 694
 League of Legends: Lee Sin Skins’ Review – StrategyZero 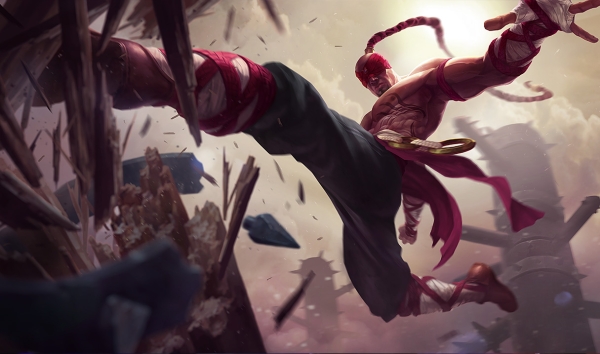 Lee Sin, the Blind Monk is the prime martial artist of the League of Legends. Even though he’s based mostly on a Shaolin Monk he also forays into other martial disciplines. A man of many talents, Lee Sin has the tendency of revealing his skill through how he acts instead of how shiny are the accompanying effects. Read further on this skins’ review and discover the many faces of this unique hand-to-hand warrior.

As far as warrior’s facets go Lee Sin skins’ mostly stick to his characteristic Wu Shu. However, Muay Thai Lee Sin is the best skin that Lee Sin has available: it provides a distinct and novel implementation of a superior martial artist. The new animations easily stand out and give the Blind Monk an iconic identity.

Notwithstanding, Dragon Fist Lee Sin is also recommended if you prefer Hong Kong action films and Bruce Lee. It keeps Lee Sin’s classic feel while providing another take on a superb martial artist. The additions aren’t as elaborate as they could be but the message is well conveyed.

Knockout Lee Sin is a rather nice boxing skin with multiple new animations. Unfortunately, the punches tends to feel similar and there aren’t any remarkable extras to explain the high price. In fact, it doesn’t go far from what Muay Thai offers yet it asks for more. Therefore, it’s a skin with appeal but expensive so better to get on sale.

Moving on to his release skins, Traditional Lee Sin is a nice cheap alternative for Lee Sin but it isn’t particularly exciting. Whereas, Acolyte Lee Sin is a skin that doesn’t seem to know what it is: if you like his look it’s not a bad purchase but don’t try to find much sense behind the concept.

In legacy land, SKT T1 Lee Sin is a skin that doesn’t go far from the casual clothing it shows at a glance. It allows for a bit of a loose interpretation but there isn’t any depth. Still, for a modern take on the Blind Monk the skin suffices despite its shallow aims.

Pool Party Lee Sin is an appealing casual style for Lee Sin that is far from striking but looks good. It has a rather limited execution and the theme is nothing out of this world. Still it’s a skin with a relaxed style that is something different; you’ll just have to excuse a permanent drink in his hand.

A skin that stands out and not only in visuals is God Fist Lee Sin. As a legendary it’s filled with potential but not all of it is realised. The skin is too centred on the golden glow to define his divine might and adds little in addition to this overused effect. Regardless, it’s a skin with a personality that is appealing though it should’ve been better developed; mainly because it can feel monotonous because of its homogeneous approach.

Playmaker Lee Sin is a skin without the proper balance between believable and cartoony features. Add to this the superficial changes and we are left with a skin that delivers on its promise but hardly impresses. The result is good but that’s as far as it goes.