Warning: "continue" targeting switch is equivalent to "break". Did you mean to use "continue 2"? in /home/strateg1/public_html/blog/wp-content/themes/suffusion/functions/media.php on line 694
 League of Legends: Azir Skins’ Review – StrategyZero 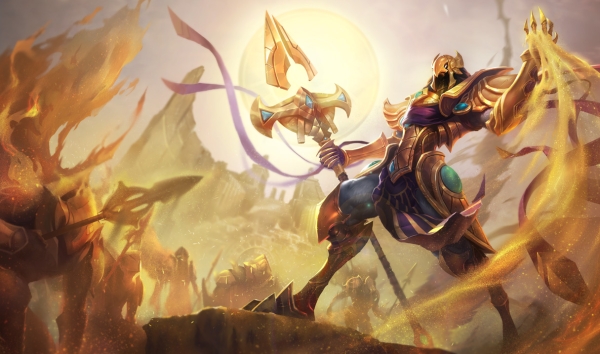 Azir, the Emperor of the Sands

The sands are shifting, gathering and assembling a new empire. The soldiers rise from its grains and stand proud to follow the command of their returned leader. Azir rekindles the flames of Shurima with his arrival but some say that he has been seen before, arriving from stranger lands. What secrets lie beyond the guise of the Emperor? Read further and find out.

As a release skin Galactic Azir does a lot and much of it is good. The model changes and effects convey a distinct appearance as practically everything from the skin is different; but also based on the classic version. In addition to this, the skin doesn’t really feel alien and mostly appears as a blue alternative to the classic yellow. In the end, it’s a good skin with a variety of additions to offer so it’s far from a bad choice.

The horror of a necromancer is captured by Gravelord Azir but in certain areas better than in others. There are fantastic designs side by side with common adaptations and so the theme doesn’t capture the imagination as it should. It all comes together nicely but the brief sparks of genius in the design humiliate the simplicity of the rest. For fans of horror skins it’s a passable option and Azir fans will get more from Galactic. If you catch it on sale it can be an acceptable option.

With a faint contemporary feel, SKT T1 Azir is a skin that can’t escape its team endorsement nature. The look never breaks the dichotomy between the modern, casual style and the fantastic angle so the lack of focus is felt. Nonetheless, the colourful visuals are attractive and make the skin stand out. If taken strictly for what it is, it’s a good option.

Warring Kingdoms Azir is a skin that bases all of its appeal on its royal peacock emperor concept. The model used for Azir as well as the Sun Disc present a fantastic picture that the rest of the skin seem bent on combating in favour of a more realistic take. This ends up making the skin uneven and prevents it from realising its best features. Thus, what appeal the skin has ends up dissolved in duller, presumably more plausible, characteristics.