Warning: "continue" targeting switch is equivalent to "break". Did you mean to use "continue 2"? in /home/strateg1/public_html/blog/wp-content/themes/suffusion/functions/media.php on line 694
 League of Legends: Fizz Skins’ Review – StrategyZero 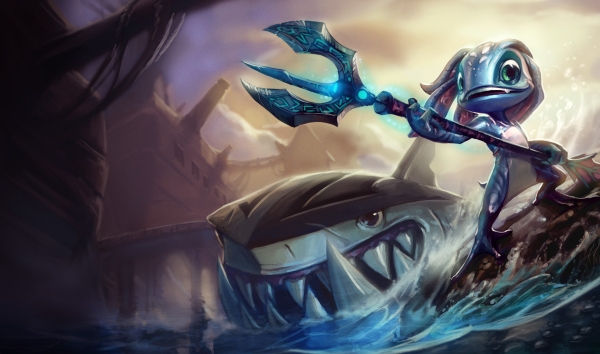 Fizz, the Tidal Trickster has a firm sea theme that extends all over his skins. As a citizen of a lost city or the coldest Northern regions Fizz never loses his dedication to catching fish; a particular angle that is explored in great detail along a new pet. Catch the perfect outfit for this nimble fighter with the help of his skins’ review.

Fizz skins are hard to recommend for the wrong reasons: it’s not that they are all good but instead that for one reason or another they feel lacklustre. Therefore, his skins fit certain styles even though none stand out. As such, Atlantean Fizz is the recommended skin for those that enjoy Classic Fizz and wouldn’t want to deviate much from its style.

Tundra Fizz is a particular skin that may appeal to fans of orcas or icy regions. Unfortunately, the appearance feels a bit too forced and strange. An alternative is Fisherman Fizz: a skin for fans of Urf and funny skins; even if it’s more effective in the former than the latter. It delivers on what it promises but in a rather simple way.

Void Fizz is undoubtedly the most elaborate of his skins but also the biggest departure from his personality. It tries to generate a playful monster, like Shaco, but ends with a deep yet superficial darkness that struggles to mix with his light-hearted identity. Maybe the legendary route, with new malevolent animations, would’ve yielded a more consistent result. As it stands, Void Fizz is an interesting but unappealing idea.

Cottontail Fizz is a charming but incomplete skin that appears great when the theme is present but lets down with the leftovers from the classic base. It’s tryly a pity that more couldn’t be done to further the theme as what is present is quite good. Unfortunately, this means that the skin can have rather noticeable highs and lows.

Super Galaxy Fizz is a skin that doesn’t really impress with fantastic displays. However, its minimalistic and determined adaptation of the Trickster into the Super Sentai theme is accomplished. The different features add up to become more than the sum of their parts which results in a well rounded skin with a satisfying feel.

Omega Squad Fizz is a skin with some appeal but that mostly ends like a straightforward adaptation. The necessary changes are made but few are memorable. The result isn’t bad but there aren’t many features that collaborate in realising a new identity for Fizz. While there are some things to like, the Trickster doesn’t impress as a member of the Omega Squad.

Fuzz Fizz is a nice skin when it centres on the dog concept. The problem is that it doesn’t always do so and the potential is clearly there. The base is surely is appealing so it’s a good skin. It just needs some extra focus to really stand out. The Prestige Edition has a royal angle which seems arbitrary and a creepy Chompers is the most meaningful of changes. Frankly, normal Fuzz Fizz is the most appealing of the two.