Warning: "continue" targeting switch is equivalent to "break". Did you mean to use "continue 2"? in /home/strateg1/public_html/blog/wp-content/themes/suffusion/functions/media.php on line 694
 Sale Overview: 04.15 – 04.21 – StrategyZero

Introduction: Vengeance with No Name

It was an old horse, mostly skin and bones but the poor old lad had always been by his side. He couldn’t imagine why anyone would want to steal him but that’s what had happened. At least, that’s what witnesses had said and he was never fond of people’s words. He kept on walking, following the thin but perceivable trace. He wondered if his horse was alright. Good old… come to think of it he didn’t remember his horse’s name. Did he have a name in the first place? Was he even a he? It didn’t matter, after all these centuries together that wasn’t going to change by some humans searching to make a quick buck or, who knows what. Did they really think they could sell him?

The trace, predictably, led to a small camp where the bandits, for lack of a more appropriate word, had gathered. It was more a ragtag band of misfits and he almost didn’t want to kill them. Not that any sort of feeling had stopped him before, he had gotten used to kill or get killed; he knew that all too well. After all, he was an infernal wraith in search of revenge riding a skeletal steed; more or less skeletal, he had some consistency still. “Anyway”, he thought, “time to see what human stupidity is up to this time.” “Hey guys, I want my horse back and you know I can take it. If you give it back we all go our ways without trouble, eh?” He smiled, well tried, his face wasn’t as responsive as it used to be and he actually wasn’t in the mood. He just wanted his horse back.

The people around the fire looked at him with fear. Someone gave a call and a large man walked from a tent in the back. His face was stern but pallid. “We don’t have your horse, Sir.” It had been a long time since he’d been called Sir. For a tough guy like him to be so polite meant he was really frightened; good. “What did you do with it?” “Nothing I assure you. We saw the wraith pass by our camp with a bony horse, Sir. We didn’t know what to think. It’s clear that it wasn’t his, Sir.” “Okay, which way?” The large man pointed, they feared the demon but they feared him more. He followed the direction, carelessly giving his back to a pack of armed and nervous men. Not that their bullets would kill him but they’d still hurt. They also would ruin his coat and he was also fond of it. They must’ve been more scared than he thought, though: not a single movement was made by them, not a sound.

The trace led to a little river where he saw his horse drinking. The water partially fell through some exposed ribs. “Thirsty again, eh?” He petted the horse’s mane. This time he did smile. It always happened when seeing how the horse was unable to forget his former life. A short distance behind him he felt the presence of the wraith. He had taken enough and he wasn’t going to let his horse become another thing. He didn’t turn, he knew where the demon was. “Came to die?” “You are the only corpse I see, human. Your suffering is pleasing but I long to add you to my collection of bones.” Several shots blazed from the sides of his back. His infernal guns lashed hellfire as he shot with arms crossed over his chest, each gun shooting without him turning. “Pity you aren’t immune to the fires of hell, eh?” He turned and saw the demon bleeding black on the ground, the soil bubbling and melting under the toxic liquid.

He stood tall before the demon and pointed his left gun at the head. “I will return. Hell is just home to me.” He shot and blew the head off into pieces. “Pity you don’t know I will chase you to Hell and back.” He whistled and the horse trotted to his side. He mounted and they started diving into the darkness until the scenery started to change from dark to fire and vegetation gave way to bones, water became lava and blood, everything changed for the worse. He had seen it all, that’s where he had come from after all. “So our friend doesn’t know we are coming, old friend. Don’t worry, he’ll know.” They kept on advancing, instinctually knowing where they had to go. It always felt right when they chased the demon. It felt right to kill the earthly avatar and it would feel right to erase all spiritual trace of it. If there were other planes they’d chase. They had all the time in the world know. So, they kept on trotting. 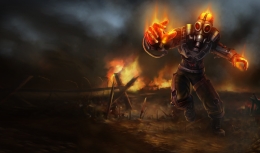