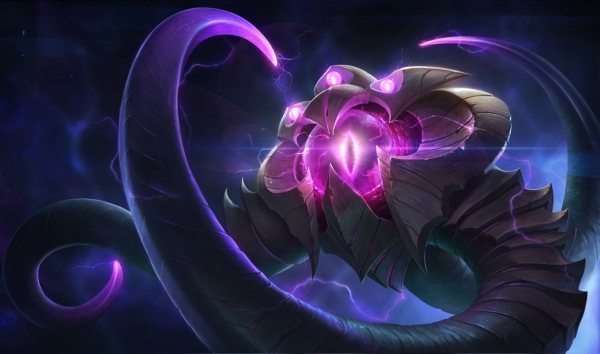 Vel’Koz, the Eye of the Void

Knowledge, the most precious of resources, but something so valuable asks for sacrifices. To learn, it’s necessary to break, disassemble and take apart that which is under study. No piece should be ignored and all shall be considered as part of the whole. Come and take a look at a thorough analysis of our present sample: Vel’Koz.

So far Vel’Koz has the advantage of having rather impressive skins at his dispossal. Sadly, they also have the unwelcome characteristic of a high price. Nevertheless, if you are to choose a skin for Vel’Koz you can safely choose based on your theme of preference: both skins are very well done.

Firstly, few champions are released with such a strong skin as the Eye of the Void. So, Battlecast Vel’Koz is an excellent option for those that want a new flavour of cephalopod. The core of Vel’Koz remains intact but the adaptation is superb and makes a great work at translating him into a hi-tech future. If you like Vel’Koz and sci-fi then this is a wonderful option.

The alternative, Arclight Vel’Koz, is just as attractive. In this case the core of Vel’Koz clashes a bit with the new heavenly theme. However, the implemenentation is visually superb and consitently done. It lacks a bit of impact due to the ethereal concept but the result is certainly fantastic.

The cheap option comes in the form of Definitely Not Vel’Koz: a costumed approach to a unique creature. The clothing follows the usual formal approach but the class it gives the Eye of the Void suits his personality without problems. More than a concealing option it’s an elegant style for Vel’Koz so fans will find it offers something appealing.