Warning: "continue" targeting switch is equivalent to "break". Did you mean to use "continue 2"? in /home/strateg1/public_html/blog/wp-content/themes/suffusion/functions/media.php on line 694
 League of Legends: Ahri Skins’ Review – StrategyZero 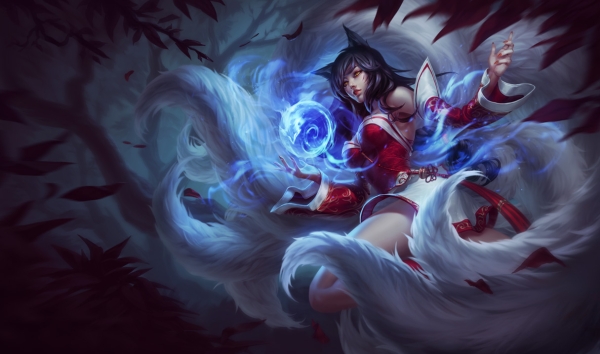 Ahri, the Nine Tails Fox is a champion based on the Korean kumiho or gumiho; the legendary nine tailed fox. The legend says that they can turn into a beautiful girl and seduce men to eat their liver. Her skins do reflect that origin: traditional Korean clothing and a dark furry coat start her wardrobe while other themes related to her nature round it. If you need advice to outfit this foxy champion keep reading this skin review.

Ahri’s release skins are simple but well done and her other additions aren’t bad at all. Foxfire and Popstar Ahri are the recommended purchases as they provide the most elaborate looks for Ahri. The former provides a very nice theme with a slightly flawed execution while the latter delivers a charming musical theme.

Also worth considering is Midnight Ahri. While it’s simpler than the mentioned skins it still offers a cohesive and elegant style. For those that prefer little but well done, Midnight Ahri may only provide a fur coat but it’s the classiest choice for her.

Challenger Ahri is a tempting option for fans of super-heroines or, perhaps, of Super Sentai shows. While the concept isn’t as developed as it could be the stylish outfit and distinct particles provide the skin with a unique personality. Sadly, it all feels a tad too superficial for a legacy skin.

One of the most expensive option is Arcade Ahri. The clothing is simply unexceptional, headphones aside, and the tails are only notable by their changing colours; they re-use the classic model. The pixels and chip-tunes remain appealing but the skin needs something different to differentiate itself from the usual. This makes it a fine option but not one that stands out from the screen.

The legendary alternative is Star Guardian Ahri. It’s a skin that can seem derivative at first yet it has to be admitted that the measured and balanced execution manages to bring the best aspects of the familiar concept to light. In spite of the brilliance and eye-catching display of stars it isn’t an impactful skin. Nonetheless, it manages to captivate with her personality.

For a schoolgirl version of the Nine Tails Fox we don’t have to look farther than Academy Ahri. The clothes are nothing remarkable but the way the textures are drawn, as if on pencil, lends the skin a different air that suits the concept and stands out. As far as re-models go it’s a fine option with a familiar theme that is done in an interesting way.

K/DA Ahri is a skin of impressive looks thanks to the reflective facets of the crystal used in so many areas across the skin. The musical theme isn’t a focus and even sounds aren’t that appealing but the visuals, despite their centre on reflections, surely make for a memorable show. The Prestige Edition gives new clothes, hairstyle and golden particles which are nice but it’s little beyond a chroma. Considering how little it offers the base more than suffices.

Lastly, if the Hanbok succeeds in seducing you then Dynasty Ahri would be a fine addition to Ahri’s wardrobe. It’s a skin with a few rough edges but it also has something unique to offer.

For the most part, it could be said that Ahri’s skins come down to personal preference. Foxfire and Popstar Ahri will probably convince more people than Midnight or Dynasty Ahri; even Arcade isn’t very impressive. Still, that doesn’t make any skin intrinsically worse than the others: some concepts are simply more universal and better delivered than others. Star Guardian Ahri mostly stands on a field of her own due to the legendary label but it’s a well earned one.